In this post I am going to talk about how to track the absolute position and orientation of a wiimote in 3D space.

This is certainly nothing new and was done over seven years ago. Oliver Kreylos, the creator of the video I just linked to, wrote a very good writeup for how he did the motion tracking along with source code. But we will see how to reimplement the same effect with just one function using a computer vision library, OpenCV!

To see what we can do with the motion tracking, here’s a simple demo that plots the position of the wiimote as I am using tracing letters in the air (also shown is a white square that represents 4 LEDs along with its projected image onto the wiimote’s camera):

And another that shows my hand:

First a bit of background about the wiimote. In terms of sensing capabilities, it has an infrared camera, an accelerometer, and if using Motion Plus, a gyroscope also. If you want the exact specs you can check out WiiBrew’s wiki.

For our purposes we will only need the IR camera which is normally used for tracking IR LEDs on the Wii’s sensor bar. The IR camera doesn’t capture traditional images and instead has on-board image processing for detecting up to 4 blobs at 1024×768 resolution which it reports back at up to 100Hz. This is pretty awesome since this is a relatively high report rate and we only have to deal with 4 coordinates rather than 1024*768 pixels like with a regular camera.

To use this data we need to connect the wiimote via bluetooth. There are a lot of libraries (most of which are abandoned) for interfacing with the wiimote. It doesn’t matter which one we choose since we just need very basic functionality for connecting to the device and reading raw IR values. The one I ended up using was wiiuse.

Once we have the wiimote talking to our computer we can capture “images” of up to 4 points like this with the IR camera: 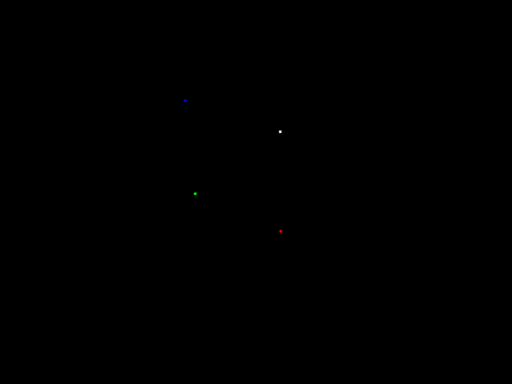 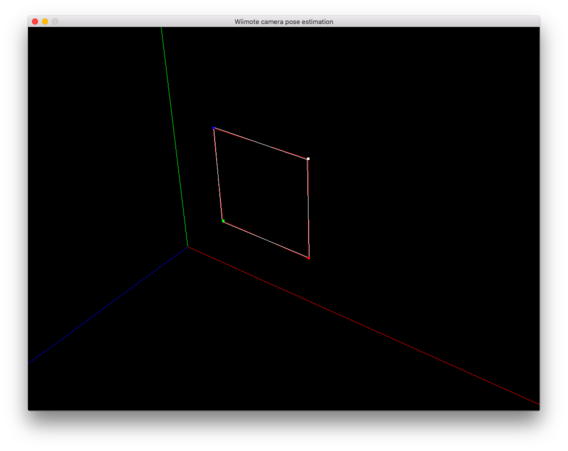 Or to draw it a different way, it might be looking at it from this angle: 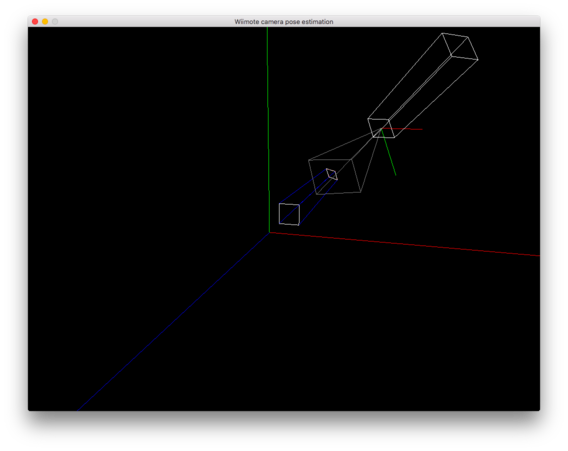 This process of guessing the camera's position/orientation is all we need for motion tracking! In other words, if we know the real shape of the object, we can just iteratively guess a location of the camera and see if it will take the same “photo” as the one we saw. In code this can be implemented with some variant of gradient descent that minimizes the reprojection error.

But you don’t need to implement it yourself. OpenCV has a powerful function that can do exactly that for you called solvePnP (where PnP stands for the perspective-n-point problem). The signature for it looks like this:

Or in short, you need to give it objectPoints (3d coordinates defining the shape you’re looking at), imagePoints (the captured 2d points from the image) and camera intrinsics (how to reproject the object into a new image for calculating error). Then it will spit back out the camera position/rotation.

Here’s a short snippet showing how it is used:

Side note: This sometimes isn’t a unique solution. Especially for a symmetric shape like a square there are inherently many different positions that will explain the image you captured: 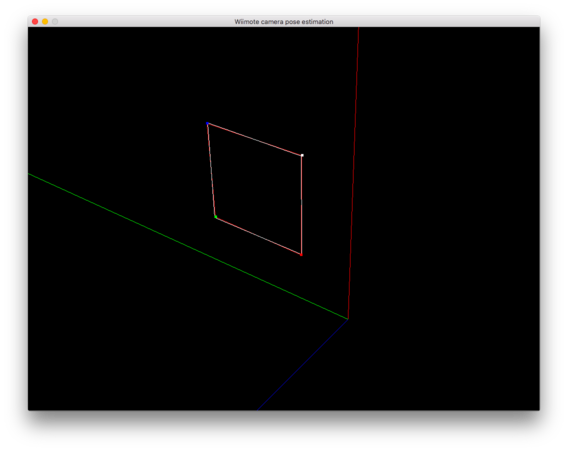 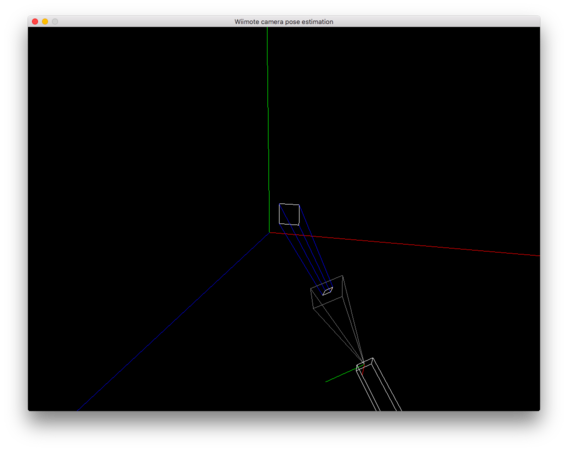 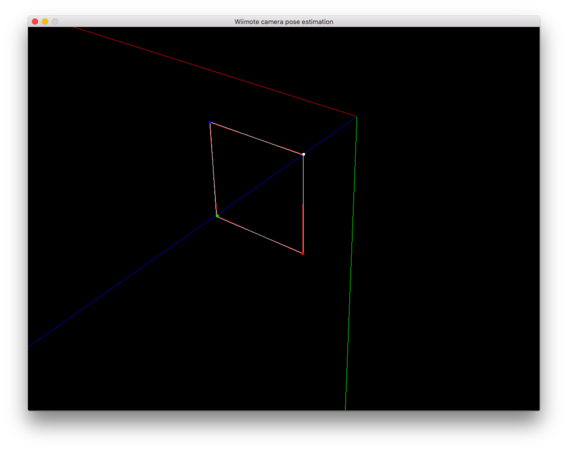 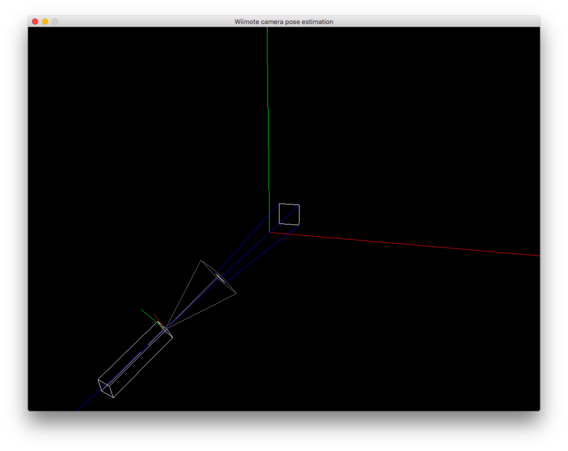 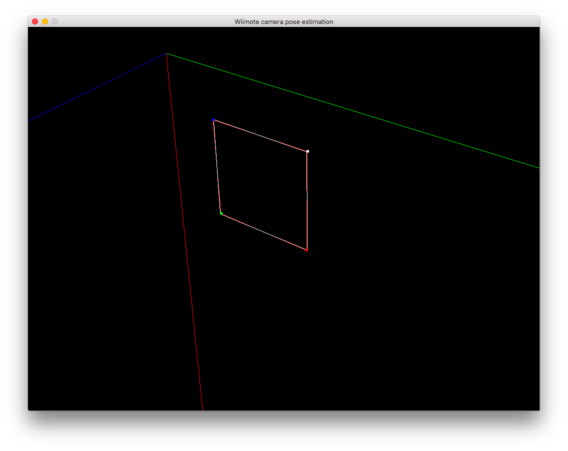 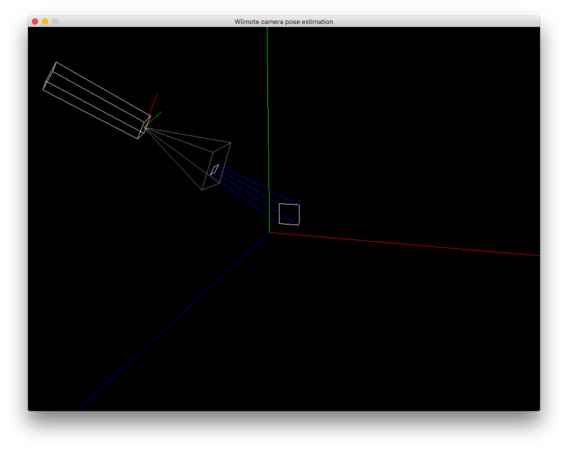 But the wiimote can only “see” 4 points so there’s not much you can do about it.

But the worst shape is probably the default wiimote sensor bar which is in a straight line:

If you just see a line of points you have an infinite number of camera pose that can explain your picture. To get around that we have to build our own IR LED marker!

It is easy to build one since all we are doing is making a circuit with four 940nm infrared LEDs. We will also need wires, resistors and batteries. I used this calculator to figure out what resistors I needed.

To make the LEDs into a square, I poked them through a piece of cardboard, using a thumbtack to make holes first, and then taped the pins of the LEDs together (I don’t have a soldering iron). I only chose square because it was easy but it could be whatever you want. The LEDs are diodes which means direction matters so make sure you hook them up in the right order (the longer pin is positive). Here is what mine looks like: 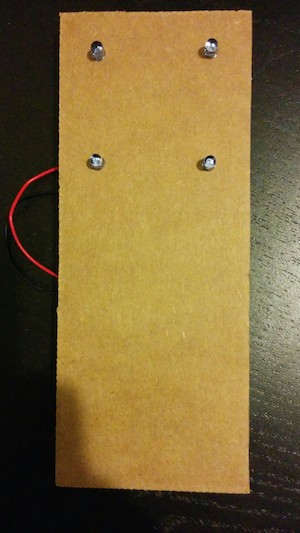 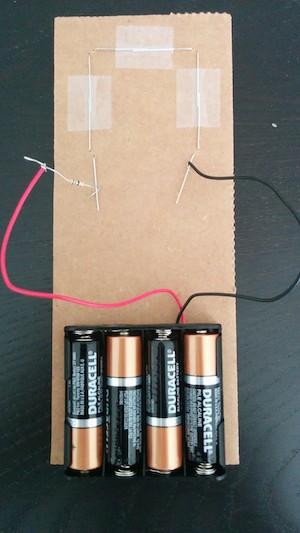 If you are human you probably can’t see infrared but digital cameras can (as long as they don’t have an IR filter) so you can use that for debugging. Here is an image taken with my android phone that shows the LEDs glowing purple: 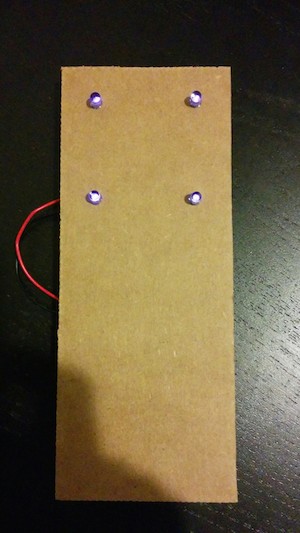 You can get the code on github if you want to experiment with it. I only tested on a Mac and with a Wii Remote Plus (which didn’t work with wiiuse at first without a small patch so it might be safer to go with the original wiimotes if you don’t need the gyro for anything else). I am not sure I would recommend using this for anything serious but it was cheap and fun to play with!

A few notes on limitations:

For those not familiar, WebRTC is a technology for peer-to-peer communication between browsers. But despite being peer to peer, WebRTC still requires setting up servers for exchanging session descriptions before the browsers can

I was cleaning out some old notes from my previous job and found some math scribbles for computing CSS transforms and thought I would share it. For some context, I was working on

Franklin Ta
—
6DOF Positional Tracking with the Wiimote
Share this